At nearly all of the exhibits, I noticed a startling trend. Almost invariably, the white cheese was getting eaten faster than the orange cheese. I found myself cheering on the orange cheese, even though I prefer the white cheese. Believe it or not, there is a point to be made here. To know what that point is though, you’re going to have to stick around for a bit as I talk about photography/club topics first. Don’t worry though. I promise to come back to the topic of cheese inequality soon enough. 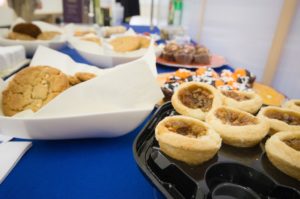 Each of us joined the club for our own reasons. Some want to be around others who share their love of photography. Some want to practice, get feedback, or even just learn how to use their camera.Others want to mentor and share their knowledge. Some want to see how they compare to others and hopefully win some ribbons. Some want to make possible business connections and try to break into the photography market at some level. Our club has a great variety of skill levels and interests. Everyone brings something different to the table. The opportunities are there, whatever you are seeking, especially with the numbers at our meetings doing so well.

Here are the “snacks” currently on our table:

Some online research has brought me two stunning revelations. First, orange cheese really is cheese. Sometimes it is dyed, but usually it gets its deeper coloring from either a higher level of beta-carotene or the tasteless annatto seed. Second, cheese preference is somewhat dependent on where you live. Apparently, people living near the coast prefer white cheese, whereas people in the mid-west prefer orange!

The Cheesy Conclusion: Orange cheese is real cheese and it can outperform white cheese when placed in the proper market. But it never would have found its market if it hadn’t put itself out there in the first place or if it worried too much about what other cheeses thought. So when you’re wondering whether to put yourself out there, whether in the museum displays, or the NECCC competition, or any other photo challenges that come your way… Be orange and be cheesy.