Did you know the world was supposed to end (according to one man) on November 19th? Yet here it is, the 24th, and I feel pretty good about my chances of finishing this blog before the fragments of Nibiru start raining fire on us. I just hope you all have time to read this.

Oh. Since the world hasn’t ended yet and may not in the immediate future, give some thought to climate change. Details aren’t out yet, but Anastasia Stanmeyer will be seeking photos and poems about climate change for a project sometime around April. You may not rhyme, But while you have the time, Maybe you could think to shoot, All the ways people pollute?

Another club meeting has come and gone. Throughout this blog, the pictures you see are snapshots of prints that were in the competition. Most of them are represented, though I think I missed a few (and certainly my phone’s camera did not do them justice anyway). If you missed your chance to see them at the meeting, don’t fret. Our December display at the museum will feature our portraits and I’m sure most of these prints will be in. The current display comes down on November 27. Lynne and Bruce will be at the museum from 10am-noon in case anyone wants to pick up their prints at that time to give themselves plenty of time to switch their portrait prints into the frames for the next display. Portraits will go up on the 29th and people will be at the museum to collect your work again from 10am-noon. Remember: Your digitals can go up; you just have to print them first. 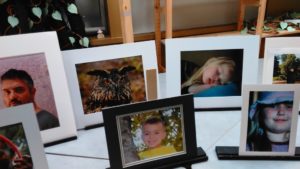 Before the meeting, people submitted their entries for the next competition (mirrors). The upcoming Club Holiday party was discussed and more details will be coming soon (most likely to emails near you). Missing the meeting doesn’t mean you have to miss the party, but you should make an appearance at the meetings too. Otherwise, people may begin to think you only show up for the booze!

Howie Levitz judged our portraits and finally earned that standing ovation he’s always wanted. He provided plenty of feedback and constructive criticism on all images. Some recurring suggestions and observations: 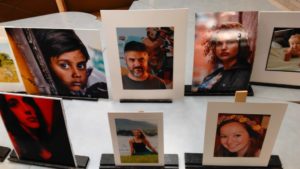 I started this blog with light-hearted joking about the world not coming to a fiery demise earlier in the week. I assure you, I only jest to hide the fear I have inside that now I don’t know when the world will end. But perhaps if the week didn’t start with a bang, maybe it’ll end with one. Have you heard of the Flat Earth Rocket Man? If not, you should look him up. He says he doesn’t believe in science, so he’s going to make a rocket to launch himself into space to prove the Earth is flat. I’m serious. In an earlier test launch, he traveled 1/4 mile at 500mph. His parachute got shredded and allowed him to crash into the ground pretty hard. But he survived somehow. Well, this Saturday is his next launch and he plans on going a full mile this time with another launch within a year to go high up in the “atmosflat” to get photographic proof that the Earth is flat (I assume he’s fixed his parachute by now). Deep down, I just want to tell him, “Shoot RAW or it didn’t happen.” Does that make me a bad person?