If you missed this passed meeting, you missed a doozy. Sure, you’ll have this blog to refer to, but there can be no comparison.

We started the night by dropping off prints for General (to be judged on March 20). After that, Peter Baiamonte spoke about the topic he’ll be judging (Cityscapes) with enough enthusiasm that Howie Levitz (our judge from Portraiture) stopped by to watch. I thought he was lost. Two judges at one meeting!

Baiamonte discussed Urban and Street photography at great length, starting with the very first known photograph of a person. No, seriously. In the lower left of this photo, you can see someone getting their shoes shined. The exposures were so long back then that everyone else in the shot is invisible since they were moving. 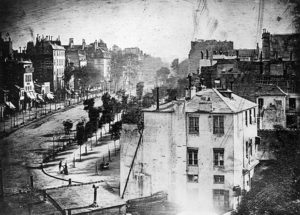 The discussion gradually explored different styles of Urban photography through the years. The consensus is that Urban photography covers everything from a fully cityscape showing hundreds of buildings, all the way down to close-up street photography of a person walking down stairs. It needs to clearly be about the city (or town). Buildings and people. That’s a good chunk of it, but there’s more.

Buildings are buildings, no matter how old a photo is, but moments show distinction that last. Whereas you can do city photography without people, what is a city without people? An empty shell? Consider the photo of female photographer Margaret Bourke White on top of a gargoyle on the Chrysler Building. Now imagine this same photo without her in it… The image would still contain the same buildings, the same gargoyle head, the same awesome height, but without the human element it wouldn’t be nearly as iconic a shot. Even today, you can go to the Chrysler Building and view this exact same gargoyle head, but you’ll never capture that same moment. That’s what makes the photo unique.

As photographers, most of us are introverts. We don’t like people. We get skittish about taking photos of people. Especially strangers. Do you shoot first and ask questions later? Do you ask first and risk getting told no? Well…

Journalistic and Documentary styles of photography were mentioned, but Baiamonte  looked at other styles as well. Shooting through water droplets on a window, use of saturated colors, experimenting with perspectives, reflections, etc… Creativity! Last year, there were an estimated 1.3 trillion photos taken. 700 billion of these were of cats. If you’re shooting in Times Square, consider the millions (billions?) of photos taken from the exact spot you are standing. How is your photo going to be different than all the rest? Well, if you think creatively and wait for special moments, you’re probably off to a good start.
Baiamonte showed the work of several urban/street photographers in his presentation. Some of the ones of special note:
Oh. Almost forgot. April 17th will be a Workshop night. I’ll be doing a workshop and can talk for as little or as long as necessary. If anyone else would like to fill a spot as well, contact Lynne to let her know. And with that, I close out this post. March 20th is the deadline for Urban/Cityscape & Street Photography. It’s also the date when General will be judged.