“What can you capture in-camera? No Photoshop. No post-processing. Just you and your camera. Exposure, white balance, cropping, etc… Let’s try to get it right in-the-camera.”

The above is a quote from the over-the-summer description for Out-of-Camera. In the following post, I’ll go into more detail on the rules/restrictions of this theme, hopefully clearing up some questions that have come out of it. Two observations first:

Breaking Down an Image

I find a great sense of irony that the photo at the top of this page is heavily edited and would not be allowed by the theme. Let’s take a look at the before and after, the alterations I made, and what (if anything) I could have done to avoid needing to edit on the computer.

To get to the After image: 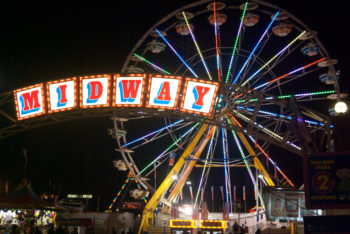 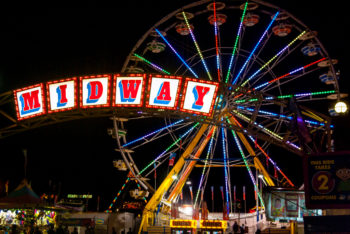 In 2011, I was on the midway at the Big E one night and wanted to see how my (then) new camera would perform handheld at high ISO (6400). Not bad overall. A little noise in the sky. For the After image, I reduced the noise, increased contrast and saturation, and popped up the clarity just a tad. But I ask you, was the Before image actually bad? Did it actually need processing?

Do’s and Don’ts For This Theme

A Word on Black & White

The monochrome category of our competitions is a bit trickier a beast for this theme. Most of our cameras have a black & white setting to automatically take photos in monochrome. Some cameras save a b&w jpg, but keep the raw as color. Other cameras actually make a b&w raw file. A handful of cameras cannot do b&w, except as processing you do after the fact.

In film days, photographers would use different colored filters to get the photo as they wanted. If doing a landscape, you might use a red filter, which would make the sky dark and allow the clouds to stand out better. If doing a portrait, an orange filter might be used to reduce the appearances of blemishes on skin. Interesting stuff, really, but many of us do not have colored filters in our camera bags anymore. Today’s equivalent would be the presets available in many cameras and in programs like Lightroom and Photoshop. My camera has Portrait (orange filter) and Scenic Landscape (red filter) as options. I’m pretty sure Urban Scene is in there as well.

Using a camera preset for b&w would clearly be acceptable. It’s being done before the shot and the preset is not really a special effect to “add to” the photo, so much as it is a way to allow the photographer to tell the camera their intent of how the light should be handled.

But what about the presets that are applied to a raw file after the photo has been taken? After all, not all computers can make a b&w image unless you do it after the fact. I don’t think there can be a 100% foolproof answer here (the SOOC flickr group mentioned earlier doesn’t even allow for b&w because of this), but I think I have a two part answer that might be close enough for the sake of the competition:

I hope this post has been helpful in figuring out what is allowed/prohibited for this theme. If not, feel free to ask. In the meantime, here are some nearby photo opportunities taking place soon: